Gateshead Quays is one of the city’s most up and coming areas, with its many bars, theatres, galleries, as well as restaurants, shops, gyms and cafés. If you are hoping to move to Gateshead Quays, here’s everything you need to know…

One of the biggest things to happen in Gateshead is By The River Brew Co’s Gateshead shipping container village nestled beneath the Tyne Bridge, with its in-house brewery, taproom, restaurant and HWKRMRKT (also known as the Hawker Market!) with 15 independent local food outlets selling pizza, oysters, tacos, burgers, cheese, ice creams, cakes, crepes and waffles.

The complex also includes the more upmarket, award-winning Trakol restaurant, next door to the Tap Room. Guest street food comes from stalls including Kaltur, which also has a Spanish restaurant on High Bridge and Dean Street in Newcastle, gourmet burger specialists Lola Jeans, seafood company Oktupus, Papa Ganoush and Scream for Pizza, Cakes Contour, Chay Chay and Le Petit Creperie, alongside melted cheese firm Cheese Sir. There is a regular turnover of new street food stalls so there is always something new to try.

Other great restaurants include Raval, a fantastic Indian eaterie; The Imperial Chinese Restaurant which offers a three-course for only £5.50 and can seat up to 150 guests and River Beat, a former police station on the edge of the Swing Bridge.

Not far from Gateshead Quays is Trinity Square which has shops, as well as Nando’s, Greggs, Burger King and Subway.

If your friends or family are up visiting Gateshead, then there’s SIX at BALTIC on the Quayside which provides unrivalled views across to Newcastle as well as serving high-quality, modern British-inspired cooking using seasonal, local ingredients.

Special shout out to Block & Bottle, the UK’s first dedicated free-range butcher and craft beer bottle shop which is located at the end of the High Level Bridge and well worth a visit. 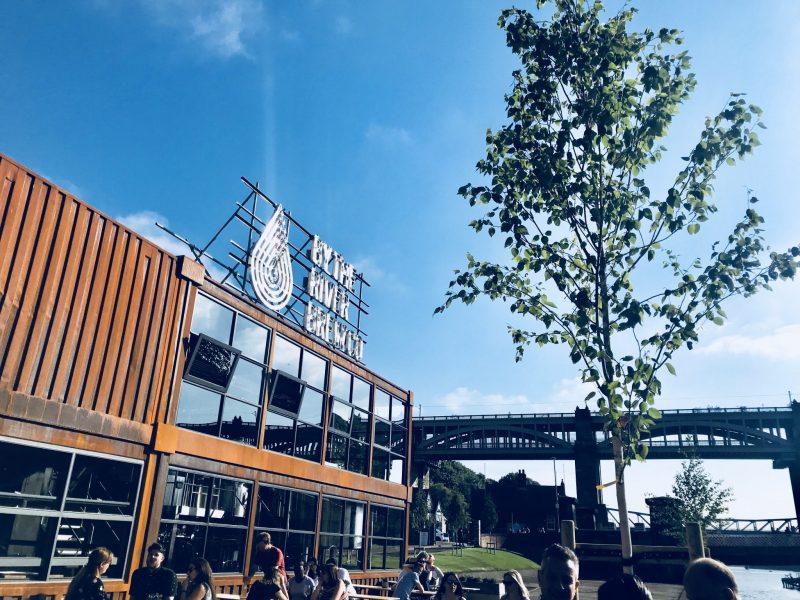 Gateshead is home to a selection of fantastic bars where you can enjoy a well-poured tipple. The Central located just off the Quayside offers the experience of a traditional boozer with Victorian exterior, live music and expertly-pulled pints. Nearby, The Schooner hosts weekly pub quizzes and ales from favourite independent and local breweries such as Wylam Brewery, The Rat Brewery and Harviestoun.

Visitors interested in the North East’s unique history will also greatly enjoy a trip to the historic Aletaster Pub which is almost a landmark when it comes to Gateshead pubs. It stands as one of the oldest in Low Fell with a building dating all the way back to 1809, where it was initially built as a dairy.

As for shopping, Gateshead has all your needs. On your doorstep is intu Metrocentre , Europe’s largest covered shopping and leisure complex, with more than 300 retail outlets, restaurants, a 12-screen Odeon IMAX cinema and entertainment hub with arcade games and 10-pin bowling. The Metrocentre has malls full of high street labels plus Debenhams and House of Fraser department stores.

Trinity Square, is the biggest retail-led mixed-use development scheme outside of London in 2013 and for some truly unusual gifts, the BALTIC Centre for Contemporary Art has its own shop with a fabulous selection of treats, including unusual jewellery, designer home accessories, cool posters, prints and quirky artists’ gifts. 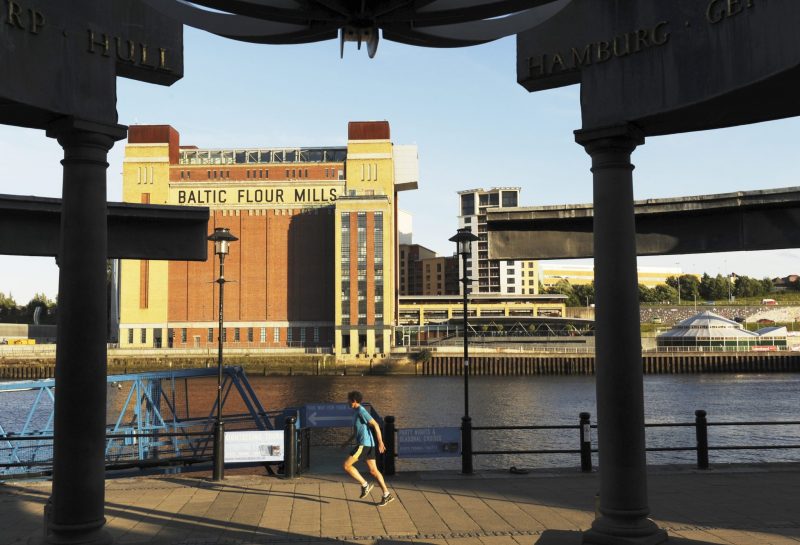 There are some great things to do in Gateshead Quays including iconic gems which are known around the globe and attract thousands of visitors each year.

BALTIC is the UK’s largest dedicated contemporary art space. Since it opened it has presented well over 200 exhibitions seen by more than eight million visitors over its four art spaces, as well as hosting the 2011 Turner Prize.

For more culture check out Sage Gateshead, the iconic concert venue on the Tyne, with a busy programme offering music for all tastes from classical to jazz and attracts the top musicians, artists, bands and orchestras.

Further afield, get up close and personal with the iconic Angel of the North sculpture which stands 20m tall and with a wingspan of 54m. Gateshead is also home to the Shipley Art Gallery, the North East’s leading place for contemporary art and design, and boasting one of the best collections of ceramics, wood, glass, metal, textiles and furniture, outside London.

If you want to find some green space, Saltwell Park is a fantastic Victorian Park. In winter the local council transforms the park into an Enchanted park which attracts thousands of visitors. The park is easily accessible by foot from many areas of Gateshead. A walk from the centre of Gateshead will take around 30 minutes.

For those who love sport, you can watch elite athletics at Gateshead International Stadium and if cinema is your thing, the nearby Vue in Gateshead shows all the latest block busters at very reasonable prices. 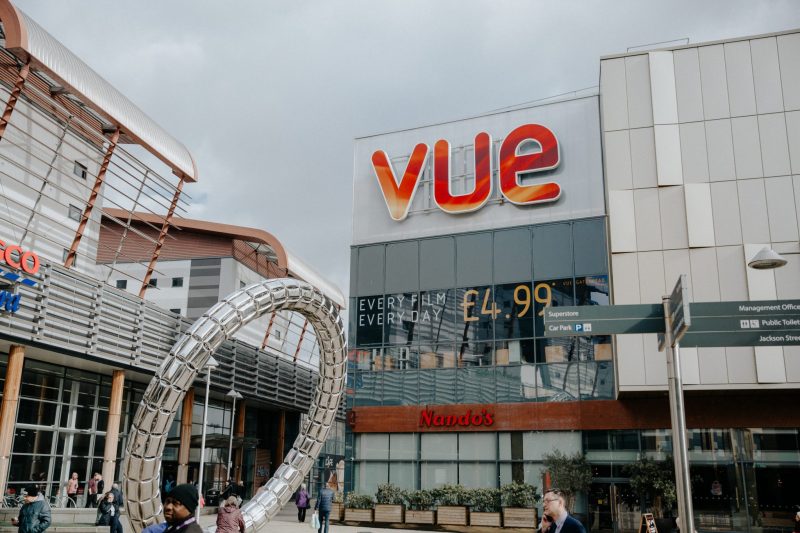 Staying fit whilst living in Gateshead Quays is easy. Your closet gym is Pure Gym in Jackson House, Gateshead which has been carefully designed to help people reach their health and fitness goals. Whether they’re a gym pro or completely new to exercise, they’ll have access to 220 pieces of state-of-the-art equipment and over 50 free fitness classes.

Gateshead health club Anytime Fitness on the High Street is also popular as is Life Health and Fitness Limited which offers the very latest, brand new gym equipment, weights, cardio, sunbeds, classes, supplements and nutritional advice in a friendly, welcoming environment. Gateshead Council also has their Go Gateshead scheme which offers unlimited access to their gyms across the borough. Many gyms offer discounts for students.

Gateshead Quays is approximately half a mile from the centre of Newcastle. Your nearest Metro station is Gateshead and the Tyne and Wear Metro system is great-value. It’s an ideal way to get around Newcastle and Gateshead as there are regular trains to and from the Airport, Gateshead, the Coast and the nearby city of Sunderland. A short trip on the Metro, which has over 60 stops, will take you to the region’s vibrant suburbs as well as major local landmarks.

Buses are plentiful and frequent and can be caught from various locations in the city centre to Gateshead and back again. There are bike sheds to park and lock your bike throughout Gateshead.

Taxis are another way of getting around the city and are in specific areas.

Trains run from Newcastle Central Station to Edinburgh in the North, and York and London to the South.

Two of our top accommodations in Gateshead Quays include Worsdell House and Half Moon, each located within Bridges Quarter and only a 30 second walk from the Tyne Bridge and High Level Bridge, meaning you’re in Newcastle city centre or on the Quayside in minutes.

Our Favourites in Gateshead 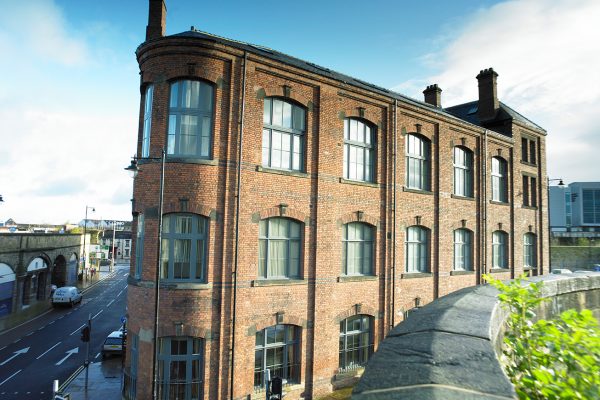 Worsdell House is made up of 25 stylish, contemporary apartments, within an historic listed building on Gateshead Quays. 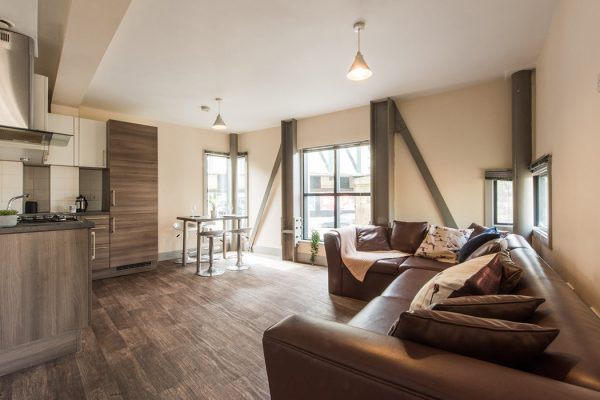