What can you expect if you live in Newcastle City Centre?

Do you love living in the heart of the action? Here are some tips on the very best the Toon has to offer!

Newcastle city centre is undoubtedly one of the most popular areas for students and young professionals. The city’s reputation for nightlife is unparalleled, and while there are plenty of places to party until the early hours including nightclubs and bars, there are just as many alternative ways to spend your evening. There are also brilliant theatres, galleries, comedy clubs as well as restaurants, shops, gyms, and cafés which means Newcastle city centre has all the amenities you need to close to home. So if you are considering moving to Newcastle, here’s everything you need to know… 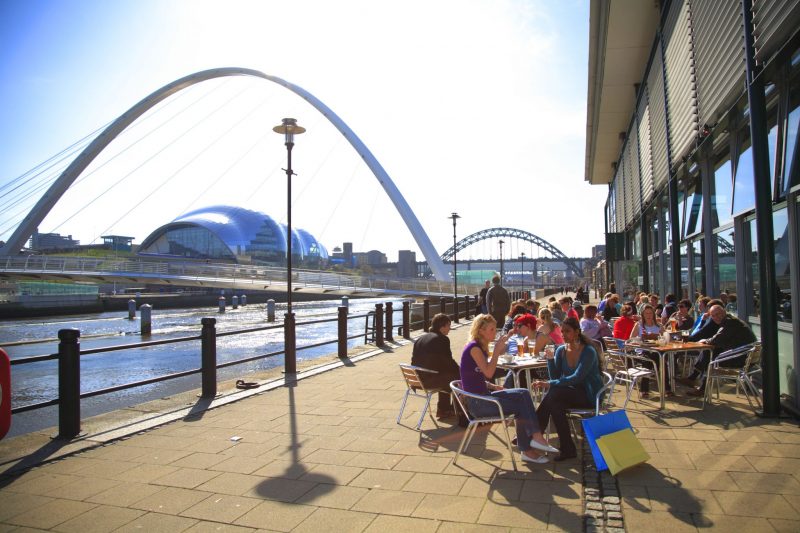 There are concentrations of pubs and bars around Grey Street, the Bigg Market and the Quayside area of the city centre. Other popular areas for nightlife are Collingwood Street, popularly referred to as the ‘Diamond Strip’ due to its concentration of high-end bars.

Newcastle’s gay scene – ‘The Pink Triangle’ – is centred on the Times Square area near the Centre for Life and has a range of bars, cafés and clubs. The Newcastle Beer Festival, organised by CAMRA, takes place in April.

If you like craft beer, Wylam Brewery in Exhibition Park has Wylam beer on keg and cask. It also has some great music, food and beer festivals. The Forth Hotel in Pink Lane is popular with students serving food throughout the day – including Sunday lunches – The Forth has a pub quiz on Mondays, starting at 8pm, and there’s often a promotion on. Next door is The Town Wall, another splendid pub and proper boozer.

Closer to the two universities, The Hancock, is very popular with students. Hearty food, a big heated beer garden, lots of pool tables, big squishy sofas and 18 TV screens showing live sport for starters. Plus, they like to schedule loads of events and deals and offers throughout the week to keep everyone interested.

Newcastle nearly always finds itself in the top ten of the country’s top night spots. Nightclubs are dotted around the city, providing a place to party for all musical tastes. Favourites include Digital and World Headquarters.

In terms of clubs, since it opened in 2005, Digital is the club to be seen at with great student nights as well. It was ranked 11th best club in the world. Located in Times Square, Digital is a state-of-the-art club with a capacity of 2,200. It has even seen David Guetta, Fatboy Slim, Deadmau5 and many more internationally-renowned DJs.

Hidden away on Hood Street between Grey and Pilgrim Streets is MSA (Music Slash Art) a nightspot catering to no more than 300 people at a time. Set against a backdrop of photography, art and murals, there’s two bars, a dancefloor, and an outdoor area to relax while you soak up the music. Other key clubbing venues include Tup Tup Palace with its waterfalls and booths. 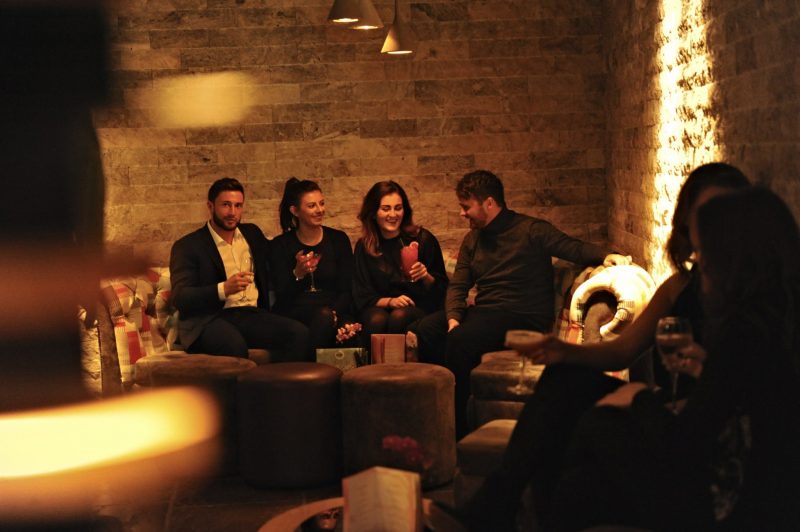 You’re spoilt for choice when dining out. Newcastle has everything from tea rooms to burger joints, street food as well as some quirky independents.

Newcastle has a wide variety of restaurants such as Italian, Indian, Persian, Japanese, Greek, Mexican, Spanish, American, Polish, Malaysian, French, Mongolian, Moroccan, Thai, Vietnamese and Lebanese. Newcastle is one of seven cities in the UK that has a Chinese village with many Chinese restaurants on Stowell Street. And Newcastle Indian street food restaurant Dabbawal is perfect for bringing a little spice to your night.

The best Italians, many of which have are happy hour deals, are Portofino’s, Prima Pasta and Pani’s in the city centre. The Quayside area also boasts some of the best Italian eateries on Tyneside in Sabbatini’s, Gusto and Babucho.

It also has a well-established street food area where you will find all manner of world cuisines to eat on the go from sweet French crepes to gourmet hand-made cakes, delectable Chinese dumplings, American cheeseburgers, hot dogs, and award-winning fresh pizza by the slice.

Café culture is also thriving in Newcastle. The Tyneside Cinema is also a great place to meet friends for coffee and offers a fantastic and affordable menu, as well as sandwiches and cakes in a cool retro setting. Quilliam Brothers Tea House next to Newcastle University is always packed. Popular chain restaurants are also part of the mix – Nando’s, Wagamama, McDonald’s, TGI Fridays, Zizzi, George’s Great Britain Kitchen and Ask Italian are all in the city centre.

Newcastle offers some of the best independent restaurants in the region too. The best of the best is House of Tides, the only Michelin-starred restaurant in the city. 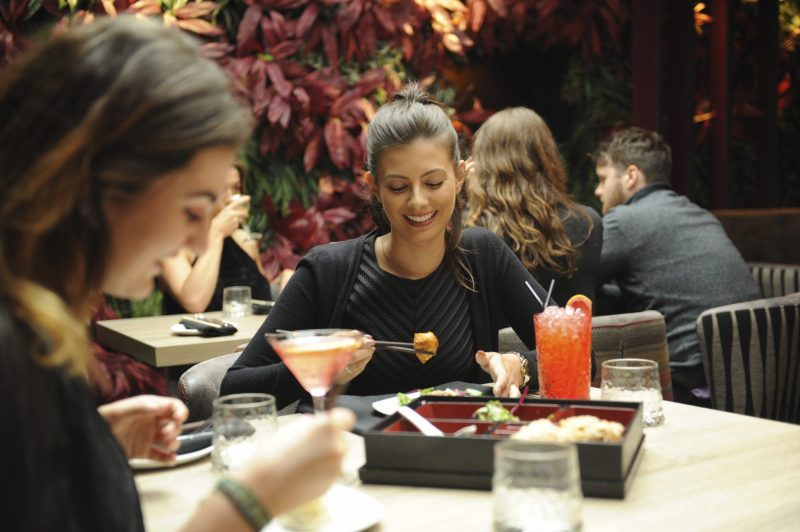 As for shopping, Newcastle has it all. Northumberland Street is still Newcastle’s main outdoor shopping street and here you will find H&M, HMV, Foot Locker, WH Smith, and JD Sports among others. Monument Mall stands where Northumberland and Blackett Streets meet. Topped by an impressive glass dome the mall is home to TK Maxx, as well as the White Company, Jack Wills, Reiss, and jeweller ROX.

A must visit on any shopping trip to Newcastle is the Central Arcade, mainly for its striking architecture.

Not far from the Grainger Market, End clothing is hugely popular and often has shoppers camping overnight to grab some of their designer trainers. You’ll discover high quality pieces by world-famous brands such as Adidas, Nike and New Balance as well as emerging brands and luxurious established designer labels like Lanvin, Moncler, Acne Studios, Alexander McQueen, Kenzo and Comme Des Garcons, to name a few. 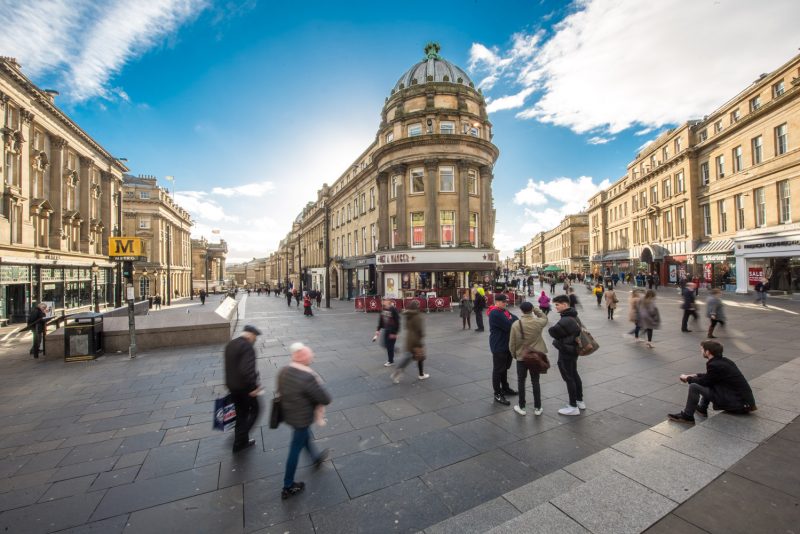 There are some lovely green spaces near to the city centre. Immediately to the northwest of the city centre is Leazes Park. Just outside one corner of this is St James’ Park, the stadium home of Newcastle United (or the Toon as it’s known amongst Geordies) which dominates the view of the city from all directions.

Another green space in Newcastle is the Town Moor, lying immediately north of the city centre. It is larger than London’s famous Hyde Park and Hampstead Heath put together. Exhibition Park is next door and a peaceful place for a stroll as well as hosting a range of events and festivals. It also hosts the weekly 5k Parkrun which attracts hundreds of participants every Saturday morning. 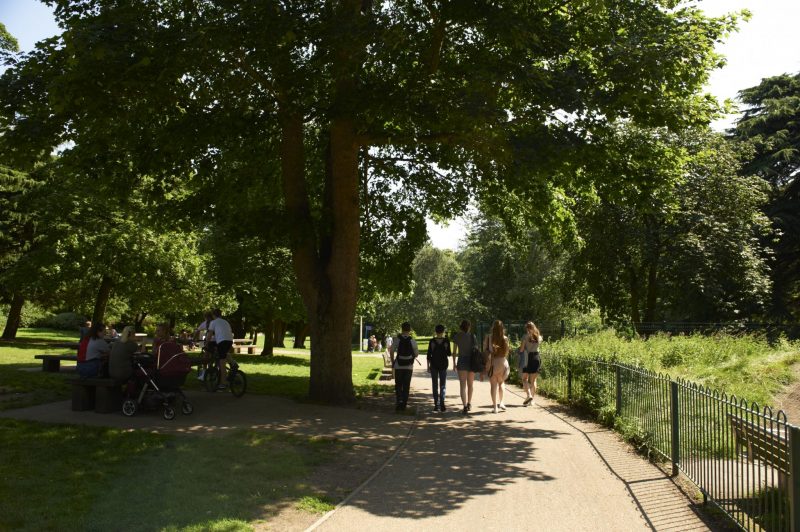 Newcastle is well served by both buses and the Metro. Your nearest Metro station is Newcastle, Haymarket and the Central Station. The Tyne and Wear Metro system is great-value. It is an ideal way to get around Newcastle and Gateshead as there are regular trains to and from the Airport, Gateshead, the Coast and the nearby city of Sunderland. A short trip on the Metro, which has over 60 stops, will take you to the region’s vibrant suburbs as well as major local landmarks. 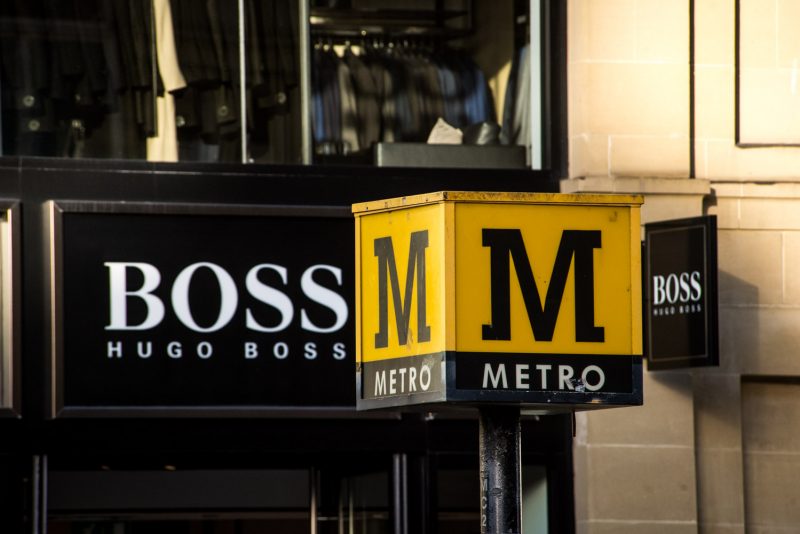 Catch a bus from various locations, including Eldon Square, Haymarket, Old Eldon Square and Central Station. Or hop on an electric Quaylink bus, on which you can travel to the Quayside, Gateshead and Ouseburn.

There are 24-hour taxi ranks across Newcastle-Gateshead, including the Central Station, Grey Street, perfect for when you want to enjoy a night out.

WHERE TO LIVE IN THE CITY CENTRE?

Our city centre properties including everything from one bed apartments to five bed penthouse flats that take in the spectacular views over Newcastle city centre and the Quayside.

And, if city centre living is for you, make sure you take a look at some of our favourite sites, Rialto Building and Waterloo House.

Our Favourites in Newcastle City Centre 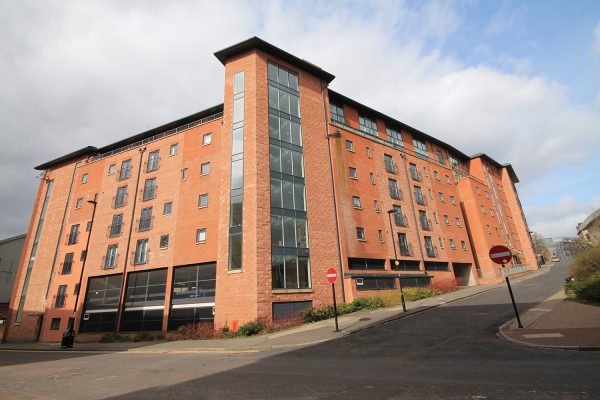 A stylish apartment block located on Melbourne Street minutes from the city centre and contains one-bedroomed apartments through to five-bedroomed penthouses. 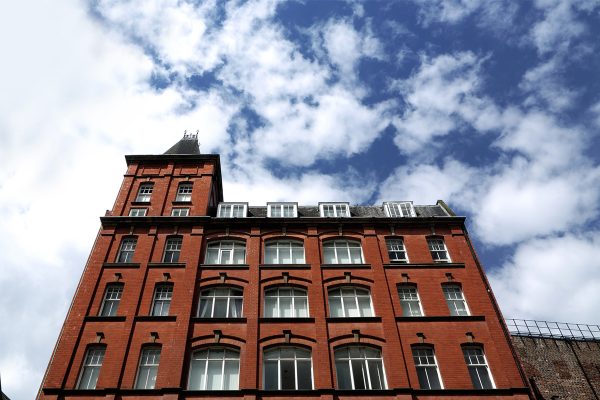 Waterloo House is a former Victorian Warehouse which has been transformed into 31 superb apartments in the heart of Newcastle city centre.